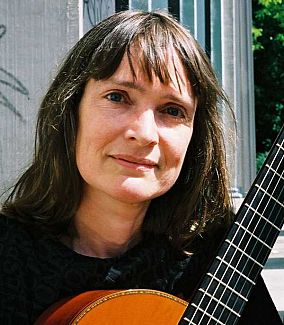 Annette has produced twenty CDs of her compositions.
The Anido Guitar Duo - guitar
Annette Kruisbrink (Holland) and Arlette Ruelens (Belgium) have been a duo since 1995. They call themselves the ANIDO guitarduo, after the legendary guitarist and composer Marí­a Luisa Anido. (1907 Argentina - 1996 Spain). Annette and Arlette studied the guitar at the conservatory of Zwolle, Holland. They attended masterclasses all over the world. Their performance is powerful and dynamic. Their repertoire shows a preference for originality. Besides giving recitals in Holland, they have played in a.o. Argentina, Belgium, Germany, Luxemburg, Italy, Sweden, Poland, Lithuania and Spain. Remarkable was their recital in Tarragona which took place on the 15th of December 1995 and where Marí­a Luisa Anido, who was 88 years old at that time, was present as special guest of honour. In 1997 they recorded their CD-album "Kanakangi", with own compositions for 2 guitars and for 2 guitars and other instruments.
Pieter Jaap Idema - voice
Irene de Boer - violin
Eric Kruisbrink - double-bass
Anneke de Jong - flute
Yi-Shuan Fang - bass marimba

the_anido_guitar_duo.pdf
Comenius
This work was composed in 1992; 400 years after the birth of the Czech humanist, writer and educationalist Jan Amos Komensky (Comenius *1592-1670). The work is based on the organum-style and the measures
are arranged according to the golden section.

Triplex (1996)
Three short movements in ABA-form: Complex, Simplex and Perplex. All three with a light-hearted character.

Lost my Lady (1993, arr. in 1997) for 2 guitars, and bass marimba.
This work consists of linked, rithmically reduced, authentic melodies, supported by a repetitive accompaniment, which, in the Middle Ages, were sung by the Minnesinger. The texts usually deal with the (impossible) love for noble ladies.

Epitaphe sur ma Pierre Tombale (1991) for 2 guitars, flute and voice.
The lyrics of this piece were written by Renée Vivien (*1877-1909), and Pauline Mary Tarn. She regarded death as deliverance from life. Out of love for death she forgave life, which she experienced as being a crime. In her epitaphe which she wrote for herself she bids farewell to life. The composition is based on the Indian raga "Kanakangi". It expresses the following emotion: Consiousness moves from fear to sadness, subsequently to confidence and eventually to self-discovered peace.

Aixea (1995) for 2 guitars, violin and double-bass
Composed for Arlette Ruelens who forms a duo with the violinist Irene de Boer. Annette Kruisbrink forms a duo with her brother Eric Kruisbrink, who plays the double-bass. For the combination of these two duos Annette Kruisbrink wrote the quartet AIXEA (Arlette and Irene X Eric and Annette). It is a one-movement piece but consists of four character-descriptions.The composer has created a musical portrait of each of the players. The letters of their names are linked to specific notes.
In the course of the piece transformations from one name to the other take place.
Label: Soundset Recordings
Item Number: WC-6078-1
Format: CD
Year Recorded: 1997
Not Available